Code Computerlove signs up to Sevendale

Shortlisted for Commercial Property Development of the Year 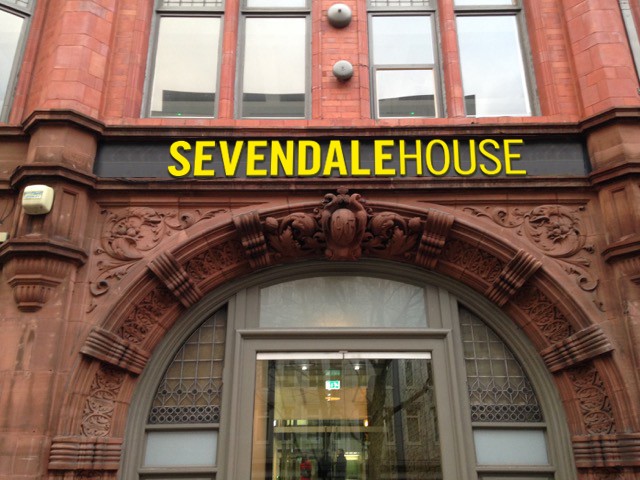 The Northern Quarter’s Sevendale House is set to welcome another high profile tenant to the building, with award winning digital agency Code Computerlove taking the whole of the fourth floor, covering 13,100 sq ft.
Currently based in Jutland House, Code Computerlove, whose client portfolio includes Oxfam, Brother, HMV, NUS, Chester Zoo, Amnesty International and First TransPennine Express, will be moving its 84 staff in to Sevendale House.
This letting, along with deals recently confirmed to Working Time Solutions Limited and PPS Limited, who have taken five year leases on the remaining two units on the third floor, sees 59,000 sq ft of Sevendale House’s available office space let, with only 5,800 sq ft on the first floor and 3,200 sq ft on the fifth floor.
Completed in September last year, the renovation of the 120,000 sq ft Grade II listed building, creating 65,000 sq ft of Grade A office space and an additional 15,000 sq ft of retail space, is one of the most significant office refurbishment schemes undertaken in Manchester in recent times.
Work involved a complete refurbishment of the ground floor reception and five upper office floors, providing Grade A space, in typical floor plates of 15,900 sq ft.
Code Computerlove will be joining an esteemed list of tenants, including Ticketmaster, Liquid Personnel, Big Cloud Recruitment, Equitix, Couchbase and most recently, Foundation Coffee on the ground floor.
Mark Davies, director of Philip J Davies Holdings, said: “Code Computerlove is one of Manchester’s most well-known and respected independent agencies, and we’re delighted they have chosen to move into Sevendale House.
“Since launching nine months ago, we have let 86% of our office space. The high quality of the refurbishment, which retained the building’s original character where possible, along with its location in the heart of the Northern Quarter, is proving to be the ideal combination for a lot of businesses, and we anticipate achieving full occupancy in the coming months.”
Wini Tse, one of the founders of Code Computerlove, said: “Our move to Sevendale House is the result of continued growth and strong financial performance, with staff numbers now at 84 and increasing. For the past couple of years we’ve had teams spread across two offices in Manchester, but the new space allows us to all be under one roof again. While we also opened a second office in London last year, which is similarly expanding with new team members, we’re continuing to invest in, and grow, our Manchester base that’s been home since our conception in 1999.”
Wini added; “We have appointed Northern Quarter based design agency Spacemen to design the office interior. Our brief is to create ‘A new home filled with energy which people love to work in.”
Daniel Harris & Co acted on behalf of the landlord, Philip J Davies Holdings and OBI Property acted on behalf of Code Computerlove.
Emma Powell of OBI Property, who represented Code Computerlove said; “When they approached us to assist with their relocation we knew that we had to find an option which would reflect their creative working practices. Sevendale’s characterful nature which incorporates agrade A specification meant that it was the perfectfit for Code Computerlove’s requirement.’
OBI have also beenappointed to projectmanage their fit out.