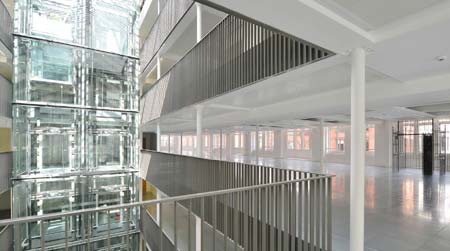 Following its £6m refurbishment, Sevendale House in Manchester city centre has secured its first commercial tenant with Ticketmaster UK Ltd. World leaders in ticketing, Ticketmaster has taken 22,765 sq ft of Grade A office space over two floors in one of the most prominent buildings in the Northern Quarter.
The 10 year lease, which will see 340 employees relocate from their office in Griffin House on Lever Street, has been agreed with Philip J Davies Holdings plc, with OBI and Daniel Harris & Co acting on behalf of the building owner and Glinsman Weller Limited acting on behalf of Ticketmaster.
Completed in August this year, the renovation of the 120,000 sq ft Grade II listed building, creating 65,000 sq ft of Grade A office space and an additional 15,000 sq ft of retail space, is one of the most significant office refurbishment schemes undertaken in Manchester in recent times.
Work involved a complete refurbishment of the ground floor reception and five upper office floors, providing Grade A space, in typical floor plates of 15,900 sq ft. Following the deal, Ticketmaster will occupy the whole of the second floor and part of the third floor.
Mark Davies, director of Philip J Davies Holdings, said: “Following its extensive refurbishment, Sevendale House has become a stand-out scheme in the Northern Quarter, providing Grade A space in a beautiful, Grade II listed building and we’re delighted to secure such a significant tenant as our first letting. We’re looking forward to welcoming Ticketmaster to the building. Following the launch of the building in September there has been considerable interest from businesses looking to relocate to Sevendale House and we are confident there will be a number of further tenants confirmed before Christmas.”